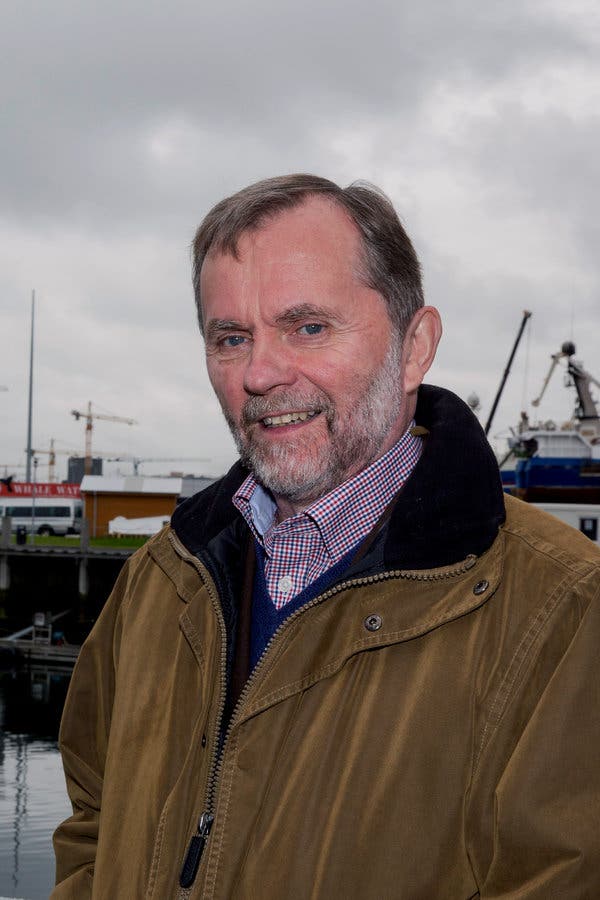 A fin whale was carved up last month at Iceland’s only whaling station, in a fjord north of the capital, Reykjavik.CreditBara Kristinsdottir for The New York Ti

REYKJAVIK, Iceland — It was a whale sighting, but not the kind the visitors expected. One summer day off the coast of Iceland, on a calmsea, a whaling crew towing freshly killed fin whales chugged past a tourist boat.

Whale cruises are popular in Iceland, and for good reason. There are plenty of things to see — fin whales tend to stay far offshore, but minke whales, humpbacks, dolphins, porpoises and puffins are usually easier to find.

Commercial whaling, it turns out, is not so popular among the whale-watching crowd. While some don’t object to seeing dead whales on vacation — as those tourists did in 2015, and others have since — “most people clearly despise it,” said Sigurlaug Sigurdardottir, a whale-watching guide.

With that in mind, Kristjan Loftsson, the man who runs the whaling operation responsible, had a suggestion for whale watchers who see his boats: “Just tell them to look somewhere else. They can just turn around and look the other way.”

Mr. Loftsson, 75, is the world’s last commercial hunter of fin whales. He has been denounced by environmental groups and his boats have been sunk by radical activists, but his business is legal here because Iceland doesn’t recognize the international moratorium on commercial whaling.

Though essentially an international outcast, he is admired by some at home. And even his most passionate critics give him a measure of respect.

Robert Read, chief operating officer of the British branch of Sea Shepherd, a conservation group that has blocked and harassed whaling ships at sea, called Mr. Loftsson “quite a clever man.”

“If you ask him a question, he generally will answer you, but he’ll pause and think before he speaks,” Mr. Read said. “That’s something that we don’t often see.”

Mr. Loftsson likes to say that whale blood runs in his veins.

He and his sister together are the largest shareholders in Hvalur, the whaling business once run by their father. (Hvalur, pronounced KVA-lur, is the Icelandic word for whale.)

They spent many of their childhood summers at the company’s whaling station. Mr. Loftsson watched as whales were brought to shore and carved up by hand. At age 13, he got a job helping out on a boat, washing dishes and scrubbing floors.

“It was fun,” he said of his early days on the boat.

Later, he worked as a deckhand. In 1974, when Mr. Loftsson was 31, his father died and he became head of the company.

Today, Iceland and Norway are the only countries that allow commercial whaling. Japanese hunters operate under a research permit issued by their own government, and aboriginal subsistence hunting takes place in a handful of countries that includes the United States, Canada, Russia and Greenland.

Globally, fin whales are listed as endangered by the International Union for Conservation of Nature, and commercial hunting of the species was halted in Iceland for 20 years, though some whales were taken under scientific permits.

In 2006, the government allowed hunting to resume. (The next year, an assessment by the I.U.C.N. found that populations in the North Atlantic were not threatened. A 2015 survey estimated there were 40,000 fin whales in the central North Atlantic.)

The country has come under steady international pressure to end whaling. In 2013, President Barack Obama called for an end to the hunt. The following year, the European Union led an international protest against Iceland’s whaling.

This site uses Akismet to reduce spam. Learn how your comment data is processed.